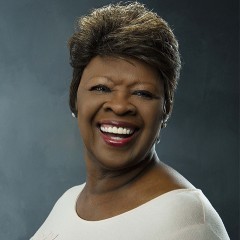 Blues icon and bona fide Soul Queen of New Orleans, Irma Thomas is the music and the spirit of the Crescent City come to life. Raised in a small Louisiana town where she cut her teeth in a Baptist church choir, Thomas got her big break after moving to New Orleans. While working in a local club she was signed to the city’s own Ron Records, who released her first hit, “Don’t Mess with My Man.” From there, she moved on to Minit Records, where Allen Toussaint wrote and produced songs for her. After a series of albums, singles and stints at legendary Imperial and Chess record labels, Irma and her husband opened and ran The Lion’s Den for more than 20 years, a home away from home for the greatest talents in blues and soul who would drop in and jam. Immortalized on the 2008 New Orleans Jazz & Heritage Festival poster and Queen of the Krewe du Vieux Parade during the 1998 Mardi Gras season, Irma is in the Louisiana Music Hall of Fame Museum, won a Grammy Award for Best Contemporary Blues Album in 2007, has an honorary Doctorate from Tulane University, several Blues Music Awards and received the Lifetime Achievement Award for Performance at the Americana Music Honors & Awards in 2018.